Prof in the house! Babette teaches at Fordham and recently edited the collection “Reading David Hume’s ‘On The Standard of Taste,’” which Mark made use of for The Partially Examined Life’s treatment of that essay in #289. So this can serve either as a follow-up to that discussion or as a fresh cogitation on the idea of an art critic. Can such people’s superior tastes be defined objectively according to their sensory, discriminatory capabilities? Like, we should listen to them when it comes to judgments about art because they can detect things about artworks that most of us can’t, whether due to their extensive experience studying such works or their particularly acute senses?

This is more philosophically beefy than our typical PvI ep, so let me spell out some of the points made: Are there objective, detectable features of things in the world that make them beautiful? Not exactly, because of the logical is-ought distinction, which goes for ethics just as for art. We could all agree that something occurrence will hurt a lot of people, or that some object is perfectly symmetrical. Various philosophers have argued that hurting = bad by definition, or that symmetrical = beautiful by definition, but Hume (and subsequently Kant) disagree. For Hume, in both cases these are matters of human feelings. It’s sufficient that correctly functioning people will feel that hurting is (normally) bad and that symmetrical things are (generally, in the absence of other blemishes) prettier than lopsided ones.

So a good art critic can’t just be someone who is a great detector of fine details, but has to actually feel pleasure at the right things, and defining which are the “right” things is difficult when the whole point of designating some people as good critics is that they’re the ones who know better than the rest of us which ones are right! Plus, as Babette points out, for art, while there might be some eternal principles like symmetry that always please people throughout the ages, our artistic sensibilities change with the age, so that particularly when it comes to humor, what smart people found funny 100 years ago is not going to be identical to what humor connoisseurs find funny now. Clearly, though, not finding this podcast to be a hoot indicates some sort of cognitive and/or affective disorder.

Relating this more directly to improv: As a beginning improviser, you might want to look for particular rules to follow that will guarantee humor, but of course there are no such things.

Babette was then game to participate in some scenes involving incorporating pop culture topics into university curricula and a post-mortem (fictional) musical about David Hume by Meat Loaf scribe Jim Steinman; for my inspiration on the latter, I will refer folks to my three-time guest Tim Quirk’s essay about Bat out of Hell. (Prediction: among my musician acquaintances, Tim may be the first to appear on PvI if and when I start dipping in that well, and if he’s amenable, of course.)

One of the passing references that Babette dropped that I was not familiar with is the “Hottentot Venus” as a potential model of beauty. As Bill points out, one of the elements of changing tastes is dialectical, meaning that the next fashion is seen as an answer or antidote to the previous one, as tastes swing back and forth.

Babette also refers to Nigel Warburton as being the direct descendent of the man who censored Hume and thus unintentionally commissioned this essay (i.e. it was created to replace something that was suppressed).

My Internet searching is not able to confirm the historical accuracy of Babette’s claim about putting baby chicks in a mattress and then erotically crushing them. But it’s fucking wild that she threw that in, so don’t give up on this before our second improv scene is complete!

The image for this episode was swiped from this article, and I hope that painting is actually by a child. Now, since the fingers are not drawn, you can’t actually see that the figure in the picture is giving the finger to the critical spectator, but as perspicacious critic I can see and enjoy that this is clearly the case. What, are you blind or something?

Get more PvI at philosophyimprov.com.

This is a pledge drive of sorts to support season two! Join patreon.com/philosophyimprov, or there’s no guarantee that PvI will exist after this summer! Here are some benefits/points about this:


What is Philosophy Vs. Improv?

Mark Linsenmayer (host of The Partially Examined Life Philosophy Podcast) and Bill Arnett (head of the Chicago Improv Studio) each try to teach each other their crafts via conversation, scenes, and what can only be called performance art. No taking turns!

Bonus/Ad-Free for 3 shows via Apple 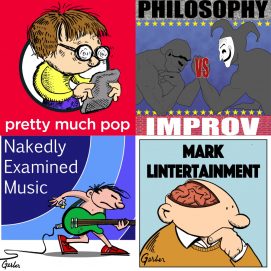 Mark & Bill are well-matched in being able to so easily articulate the mental processes around their respective pursuits. Whatever sound range both their voices fall within, it's really pleasant on the ears, like listening to two small yet efficient air conditioners placed side by side.

Mark & Bill are well-matched in being able to so easily articulate the mental processes around their respective pursuits. Whatever sound range both their voices fall within, it's really pleasant on the ears, like listening to two small yet efficient air conditioners placed side by side.
https://philosophyimprov.com/testimonials/149/
0
Philosophy vs. Improv